I always have had some kind of attraction towards names with five letters and off late, this syndrome kept creeping in me as words like “Theri” “Vijay” “Atlee” were in the news like almost every other day. These were few of those common names that did all necessary buzz in the social media for all right reasons.  Topics on them kept trending on every other social space anticipating the much awaited product “Theri” from Atlee and Vijay who have joined hands for the first time ever. Although Atlee proved his mettle with his monstrous hit flick “Raja Rani”, it would always be a different ball game altogether when it comes to directing Vijay for it could fetch too much a fame or even kind of back-fire when things don’t fall in place. Taking into consideration all these, Atlee has come up with an all-time action packed racy family entertainer ”THERI”. 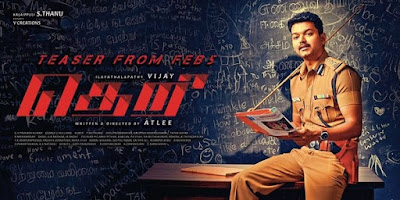 The Story revolves around an IPS officer, VijayKumar who proves to be a strict charming and adorable cop battling all petty crimes in the city while he happens to meet Mithra (Samantha) who has been doing her house surgeon. The lead lady falls in love with the cop seeing his good natured behaviour and guts to fight such intolerance out. They fall in love with each other and when things go absolutely smooth between them, enters the Antagonist who comes in search of Vijay for all that he has done to him in an earlier crime case. After all apprehension from Mithra’s dad, Vijaykumar marries Mithra post which they have a baby who grows along. When things seem pretty happy with the whole family, the family gets brutally murdered by the antagonist, for different reason after which Vijay and his kid escapes the whole incident to take revenge on the enemy which forms the climax of the much anticipated movie of this year.

VIJAY:
Vijay scintillates on the Screen as Joseph Kuruvilla, VijayKumar and Dharmeshwar. The kind of variations he has portrayed across these characters is just stupendous. Joseph Kuruvilla keeps subtle with his slap stick body language and innocence while Vijaykumar rules the screen with his humungous screen presence, wit and valour. It’s evident that Vijay has toned his body down for the role and it greatly pays off during too many scenes in the movie. Costumes for Vijay was a notable part of the movie for they really were very attractive suiting the mood of the scenes.  Vijay looked extra glamorous and more handsome as ever while the heroine coping to it up with absolute ease. Vijay scores a centum for his body language, mannerism, carry over and make over and have carried the story from the start until the end with absolute ease and sheer talent. Vijay has also complemented others really nice with his miraculous performance. This probably will go into the good books of Vijay as one of his best character performance ever. 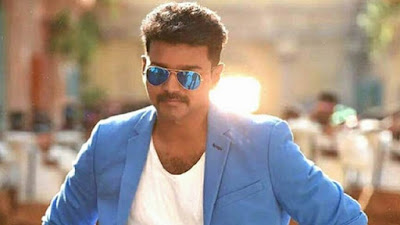 SAMANTHA:
The gorgeous looking lady who mesmerises with her look is back with a back in this movie. She looked flawless and the chemistry between Vijay and Samantha looked very pleasant on the screen. She has played her part to perfection and the kind of costumes that she has donned is truly sensational. The portions involving Samantha and Vijay were a delight to watch while she lends Vijay a shoulder to take the movie forward on from thereon. Samantha fits into the whole character without a doubt and comes out with flying colours.

NAINIKA:
Nainika is that cute little star that adds the much needed extra charm to the whole script. She sweeps everybody off the floor with her innocent acting and sweet voice that she has lent. The chemistry that she and Vijay share is just amazing on the screen and is more than just a delight to watch. The body language and the maturity she has exhibited towards her acting donning this role is just mind blowing. Nainika as Vijay’s daughter is just a flawless choice and is an amazing find. She is just that ice topping on the cake that keeps the movie going interesting as ever.

AMY JACKSON & RAJENDRAN:
Although Amy has not got a great deal of role in the movie, she has kept it to the point. She understood clearly as to what is being expected out of her in the role and executes it to perfection. She looks stupendous as a teacher who hails from Kerala and manages living in the role in the due course. She looks pleasant to watch and performs it to perfection when it comes for the role she has donned.

Rajendran has done a great job as a police / comedian travelling with Vijay all along the movie. The timing humour sense that he possesses is just unbeatable and delivers dialogue to perfection. The bonding between Vijay and Rajendran is evident on the screen for the kind of comfort zone they share. They complement each other with tremendous performance.
Other noteworthy performances include the one by the ace director Mahendran who has donned the role of an antagonist and Radhika who is Vijay’s mom in the movie. Mahendran with his experience and knowledge brings an all new perspective to the role and has done a matured job in convincing audience as to what he is up to in the character. Radhika on the other side captures everybody’s heart with her usual witty one liner and funny body languages. Radhika has done a great job in very many sentimental scenes as a mom and as a mother in law. 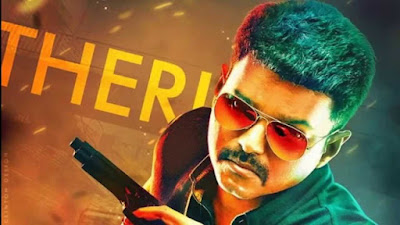 Never can I forget to mention that GV Prakash has done a brilliant stuff as with the background score. At certain places, the score elevates the movie all to a next level where Vijay compensates with his mass elements to his fullest. Now that the songs were already a hit, a special mention to “Jithu Jilladi” and “Theri Dubstep” that made audience blurt out in sheer ecstasy. The background score at certain places were out of the world and it perfectly complimented the mood of the scene so much.
Another hero in the movie is George who visualised each and every frame to the extent of beauty possible. The reflections of his thoughts are so very nicely put on the screen and it has come out meticulously well. Lightings and some camera works used in the some of the fight sequences are truly worth a standing ovation. 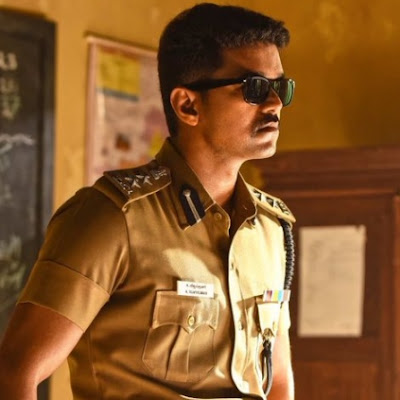 It will be a crime if I miss to mention the kind of efforts that Komal Shahani took to make everything look absolutely beautiful. The costumes looked fabulous and so as the make overs that the characters donned all over the movie. Vijay looked fabulous and sleek in the choice of wardrobe and the costume designer has to be given that kind of applause.
Atlee has to be given the whole credit for pulling such a meticulous flick off.  Making Nainika act and making the whole thing beautiful is absolutely tremendous. Vijay has been used to his fullest with a different perception towards approaching the character and that completely satisfies his stardom image. THERIffic is the word to be described.

VERDICT:  Well Knitted, Stylish, Energetic and Racy Family Cop Entertainer that probably will set a benchmark to other movies of this Genre.
Posted by The Mask at 06:35