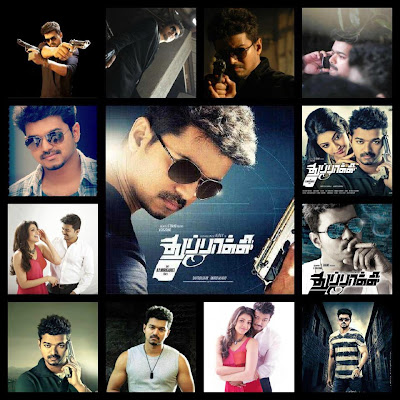 Hi People, it has been quite a while that I talked to you guys through this medium for which I apologize and feel happy in parallel that I am talking to you guys through this kind of a post that is the Hot-Selling cake in and around the city and even the State. In India, it is Cinema and Cricket after Food, Clothing and Shelter. This post is former eccentric than the latter. In India, Festivals are also characterized by the kinds of Cinema that cast their favourite Stars. The two days old Diwali is not an exception to this kind of craze among the movie-buffs and India witnessed various big names such as “Jab tak hai jaan”, “Son of Sardar”,”Thuppakki” and “Poda Podi” that contributed various emoticons at the box-office.

This post is going to talk about a movie that witnessed an earth-shackling opening at the box office not just down south but in various parts of the country and even outside it. The movie got released simultaneously in India, France, US, Sri Lanka and Germany. The movie saw numerous hurdles with the title and finally managed to come out successfully as no other title would have served the purpose. The movie already created an enormous expectation amongst the public with mind-blowing chart-busters by Harris Jayaraj and it never failed to live up to that humungous expectation. “Thuppakki” (Gun) must have got released by 9th of November and due to unavoidable reasons got postponed to 13th of November.

For many a people, Diwali started the day when reservations for this movie started. People were so curious to watch it the same day it got released and it dint take more than an hour for many a famous multiplexes to get the tickets filled for the first week. I and my cousins planned a way early to get ourselves in at any of the theatres the opening day the movie gets released and so managed to get the tickets as we booked it well in advance. 13th of November started with purifying oil bath, new dresses and prayers followed by mom’s yummy and nutritious food. I was not able to stand my curiosity and excitement that I kept cursing the noon for having crept so long. At the stroke of five we got ourselves ready and left for a near-by theatre to enjoy my hero on the screen. Roads blocked, traffic diverted and Police Patrol signed the kind of impact this movie created on people even before the release. I could see almost twice the amount of people standing before the theatre gates that the hall can occupy.
The audience assembled near the entrance gates of the theatre ten minutes before the show started and went crazy shouting the star’s name with at most love, care and affection. People rushed towards their seats to see their favourite star in action as soon as the gate keeper signalled the start of the show. We got settled comfortable well and anticipated the most awaited movie of the year “Thuppakki”.

STORY LINE:
The movie opened up portraying some of the exquisite localities in and around Mumbai while credits went on to showcase people’s efforts. The next frame opened up at a railway junction where Vijay’s family members eagerly await his presence who comes from the Indian Army for a 40day Vacation later when we realise that Vijay is also a DIA Specialist and a Secret Agent of the Indian Army. On the other hand, the train that Vijay comes in gets struck mid-way due to some technical failure and the army Jawaans while their time out on the barren lands of some exotic location. Vijay is being introduced to the audience with a breath-taking fight followed by a peppy number. This can be confidently told as one of Vijay’s subtle, gentle and practical entry of recent times. The moment Vijay lands down, he is right away taken to Kajal’s house for talks regarding their marriage where both express their unhappiness marrying each other.

Gradually, Kajal gets used to Vijay from her routines and starts liking and in fact loving him even at one point in time. Meanwhile, a blast at the centre of the city hints Vijay that something wrong happens in the City and needs immediate medication. Vijay gets hold of a suspect and put every others of the network on to lime light. The first half moves at lightening pace with appropriate mixture of comedy, song and action sequences. The tail end of first half, twenty minutes prior to the interval break would bring you to the edges of your seats. You would start feeling the goose-bumps all over your body. The screen comes to end the first half with the trademark “I’m Waiting” dialogue from Vijay.

The Second half starts with importing the million dollar Villain, Vidyut Jamwal from the North-East border of India to Mumbai as the necessity arise. Vidyut Jamwal goes in search of Vijay who takes enormous efforts to abort the growth of Sleeper Cells in India. The second half of the movie revolves around various events that bring Vidyut and Vijay together for the Climax show down and the Climax show cases the hero’s victory over the bad for a noble cause.

CAST:
I would boldly shout on top of my voice that Vijay is the true hero of the subject. He has exhibited some extraordinary performances in the recent past and this movie stands apart. Vijay showed sheer class and mass in everything he did. Vijay looked muscular, stylish, cute and handsome. Vijay’s dialogue delivery, his reactions, his nuances, his dance, his fight mesmerizes people for him and I cannot even imagine any other hero doing this subject. Vijay is 200% the apt choice for this movie. Vijay is new, refreshing and a visual treat to watch. Kajal shared screen with Vijay and he is hot and sexy in the movie. She does not have much role to play in the movie and she is just a glam doll in the movie and had been branded a boxer in the movie. She is looking cute and awesome. She is fresh and reverberating. Sathyan plays an important role in the movie. He has performed decently well in the movie who constantly wavers between the light and serious portions of the movie. Jayaram is one key cast of the movie. His timing dialogues and reactions set people a laugh riot. He fills the screen with enthusiasm and fun and is a pleasant to watch. Vidyut Jamwal, the Villain of the movie is a million dollar villain as already told. He has performed with ease and looks gorgeous. He has got all the cuts of a perfect villain.

SCREENPLAY:
This is obviously the second hero of the movie. The way the story was narrated would strike between your brows. The transition between the scenes was smooth and convincing. The interval block and the climax would take you to the end of your seats. Mr.Murugadoss needs a special laud for all his efforts and toil which emerged so evident in the movie.

CINEMATOGRAPHY:
Mr.Santosh Shivan was left in-charge of this section and emerges a terrific winner. This movie uses a special camera which is one of a kind in the Indian cine industry. The locations were exotic and eye captivating. The camera has recorded the nook and corner of the city with at most beauty and has delivered the clarity of the story. Each and every scene speaks for the quality of the way the camera had been handled. Songs sounded a lot better with the kind of visuals imparted to it.

MUSIC:
The album got released a month back and it received immense response from the public. The album had songs of all genres and the visuals of the songs had also come out extraordinarily well. The background score for the movie was notable. The theme music was amazing and it kindles in you a thirst, anger and agony. Harris had done a commendable job with the music. To be very honest I found a couple of songs out of place which was over-shadowed by a racy screenplay.

DIALOGUES:
The movie leaves in you some strong and recommendable dialogues that are thought-provoking and eye-opening. Some dialogues are really good and they are put in proper places to make them sound the way they ought to.

COSTUMES & DANCE:
The costumes used in the movie were good and cool-looking. Vijay looked stylish and cool in his attires and so did Kajal. The costumes were apt and looked pleasant. They have used a concept of double costumes in the movie which looked absolutely good. The dance movements were amazing but sad that Vijay did not have any signature movement in the movie as in the case with his previous movies. People who had expected Vijay to dance his best would have been disappointed.
NEGATIVES: NIL

In nutshell, a mind blasting Diwali entertainer and no doubt that “Thuppakki” has hit the bull’s eye.